The Sankyo workshop is a creative space driven by our passion for music. To foster this creative spirit, we design and build special projects that are different from the standard models that we offer.

These projects often begin as the idea of someone in our workshop, and evolve into something for our entire team to work on together. Whether it is something revolutionary, like a proprietary new technology that enables us to etch with gold, or something evolutionary, like the A-Foot Concert Flute, we are always excited to challenge ourselves and unveil something special.

The bass flute project was an exciting one to work on. For many years we dreamed of adding a bass flute to our line, but it had to be of the highest quality and superior design which takes time and dedication. The new bass flute has a beautifully crafted key design that is comfortable for the player. It is silver-plated in order to be as lightweight as possible. The sterling silver lip plate adds color and richness to the sound.

The new bass flute is a beautiful addition to the Sankyo Harmony Series. We hope you enjoy playing it as much as we enjoyed creating it.

The A-Foot Concert Flute is pitched in C and has two extra keys on the footjoint to facilitate a low Bb and low A. These keys are activated by the left hand pinky with levers near the G# key. There are some orchestral pieces that require the low Bb including a Mahler Symphony, Mussorgsky’s "Pictures at an Exhibition", and Berg’s "Wozzeck". The A-foot makes it possible to play some violin pieces without arrangement. Other benefits include a more stable high register and a deep, dark sound.

The A-foot is available by special order on the Sankyo CF 401 and CF 501 models.

This proprietary new technology allows us to engrave gold on silver. We can engrave in gold on the lip plate of your silver flute!

This flute has a brilliant sound with a 950 silver body, 10K gold rings and a Swarovski Crystal charm on the headjoint crown. It is made with thin, lightweight key mechanism for a quick response and vibrant tone.

The beautiful ROSA flute features the fusion of sterling silver and rose gold on the tube of our CF 401 model.

Many flutists love both our silver and our wood flutes, so we decided to create an option that would allow the flutist the best of both worlds in one flute! We offered the Sankyo CF 201 and CF 401 models with a sterling silver headjoint as well as a grenadilla wood headjoint, packaged together in one case. 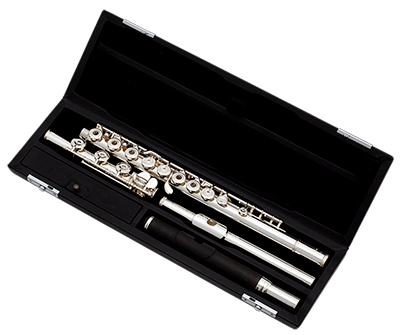 To celebrate our 40th year of flutemaking, we designed a new model. It was essentially the CF 401 model with thinner ribs, posts, and rings to make it extremely resonant. It also had an engraved lip plate and keys.

Invented by Eva Kingma, the revolutionary Kingma System® provides expanded capabilities with a full quartertone scale as well as complete multiphonic venting. Standard fingerings remain the same through non-use of the additional six keys, therefore it can be played as a traditional Boehm flute. This mechanical design offers many new possibilities including tonal shading,exceptional control of pitch even with extreme dynamics and accessibility to increasingly popular contemporary and nonwestern types of music. Through collaboration with Eva Kingma, Sankyo is proud to be one of the elite flutemakers capable of offering the innovative Kingma System®.

Always curious about the sound qualities of different metals, we had to build a 10k Gold Flute to hear what sound it would produce! 10k gold is the ideal combination of the richness of gold with a touch of the brilliance of silver. Our 10k gold flutes are offered with a choice of drawn or soldered tone holes.

950 silver is a unique silver alloy that consists of 95% pure silver. The increased density results in a dark sound with deep resonance. Sankyo models CF 701 and CF 801 are crafted from 950 silver.

Our grenadilla and cocus wood was carefully aged for 10 years before we began building wood flutes. It was an exciting project to doscover what sounds were possible with a wood flute. Wood has a character of sound that is full and rich with a certain maturity to it that a metal flute cannot match. Sankyo Wood Flutes are played in several orchestras throughout the world, as well as in chamber groups and as a solo instrument.

We put our heart and soul into the creation of the Sankyo Piccolo, taking two and a half years to complete it! Using a straight tube instead of a conical tube, our piccolo has a consistent tone with great intonation throughout the registers.

Our first 997 Pure Silver, or Super Solid Silver, flute was built in 2000. Because of the overwhelming response to the unique sound of this material, the flute was added to our line-up. Today, this flute is called the CF 901 model, and it is the flagship of our Silver Series flutes.

The Pure Silver used to craft the CF 901 is 99.7% pure silver. This high silver content creates a completely unique sound. The tone is darker than sterling silver and has exceptional projection. Our favorite characteristic is its flexibility and color. One cannot help but play this flute with expression and emotion.

The Flute d'Amore in A has a truly beautiful quality of sound. Since it is lighter and shorter than an alto flute, it almost feels like playing on a usual Boehm flute in C, while capturing some of the timbre of the alto flute. With its range between the Boehm flute in C and the alto flute, it opened new possibilites for new repertoire, including many pieces written specifically for such an instrument. "To play and own a flauto d'Amore is an enrichment for every flute player", said Mr. Andras Adorjan, who gave advice to Sankyo in order to develop this new model.

With an internal tube diameter of 20mm, the Flute d'Amore in A has a slightly larger bore than the standard concert flute. The flute is sterling silver with 0.38mm tubing thickness, soldered tone holes and 10k white gold springs. Flute d'Amore is available by special order only.

The first special project was a 24k Gold Flute built in 1995. At that time, no one had ever made a flute from 24k gold, and we wanted to hear the sound that this beautiful material would make. The 24k gold flute continues to be one of our favorite flutes, perfectly suited to the world’s finest orchestral players.