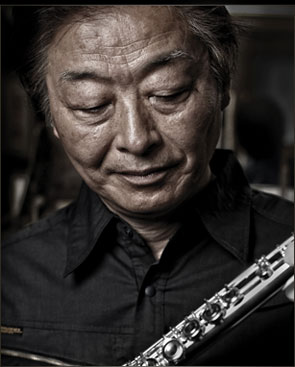 An obsession with sound is the driving force behind Sankyo. Founded by three men from humble beginnings, Kikuo Hisakura, Hideo Takei and Taichi Oki relentlessly pursued their vision of building handmade flutes not as simply a manufacturing process or science, but to elevate flute-making to an art. They wanted to capture a sound that inspires and fulfills.

When Hisakura, Takei and Oki formed their own company in 1968, they were motivated by their passion to express their technical expertise and more importantly, their artistry. They invested in their shared dream and built the first Sankyo flutes in a garage. While our founders worked tirelessly to grow their new company, they had not imagined that Sankyo would evolve into the international success of today.

Kikuo Hisakura’s prior career managing another flute company’s production had established his reputation as a “genius” of flute-making. He designed almost all of the Sankyo mechanical systems, scale and headjoints as well as many specialized tools and equipment. Kikuo Hisakura was a visionary from the beginning through his passing in 2009. We honor him by keeping his pioneering spirit alive.

A great example of this is found in Hisakura’s son, Yutaka. Yutaka Hisakura started to learn about craftsmanship from his father when he was a young boy, and he is now our current President of Sankyo. While his official role is to manage the company, he can still often be found in the production section doing what he enjoys most: building flutes.

Hideo Takei managed the company in the beginning and contributed greatly to the finishing aspects of manufacturing, such as pad design development and expertise in padding technique. Although he is now long retired, Mr. Takei still visits the factory almost every day. Taichi Oki went on to establish his own company specializing in the polishing of small parts.

The Sankyo name can be divided into two Japanese words: SAN+KYO, where SAN means “three” and KYO means “hibiki” which translates to “sound.” Thus, the “three sounds” is our foundation and represents our three founders and their pursuit of the essence of music: the intangible connections between craftsman–musician–audience.

Our flutes hold a secret within their walls. The extraordinary sound of a flute we craft will come to life when it is played and loved by someone who matches it. That special connection of flute and flutist is what we seek. This is the pride of Sankyo Flutes.