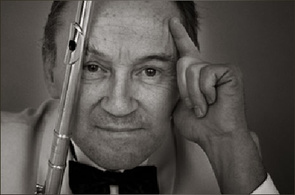 “When I played this flute for the first time, I could feel the adeptness and quality of the instrument. On behalf of all flute players, regardless of age, level or nationality, I wish to express our sincere gratitude to Sankyo for providing us with such opportunity to enhance our art.”

Alain Marion was one of the greatest flute players of modern times. Both as a performer and as a respected teacher, he helped to ensure that the style and traditions of French flute playing will be carried forward for generations to come.

Alain Marion was born on Christmas Day 1938 in Marseilles, France. He studied the flute at the Conservatoire there under Joseph Rampal, father of Jean-Pierre Rampal, and gained a prestigious premier prix du flute while he was only 14 years old. Marion later studied with Jean-Pierre Rampal at the Paris Conservatoire.

In 1961, he announced his presence to the musical world when he won the Geneva Competition. He went on to hold Solo Flute positions with the Orchestra of Radio France, Orchestre de Paris and Orchestre National de France.

He held the title of Flute Professor at the Paris Conservatoire from 1977 until his death in 1998. He also taught every summer at the Academie Internationale d'Ete in Nice, taking over as director of this institution in 1986. Students came from all over the world to study with him. He recorded extensively and travelled throughout the world performing and teaching.