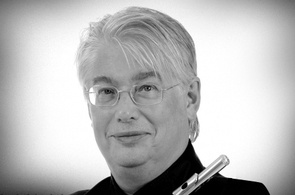 Professor of Flute at Malmö Academy of Music, Lund University

Professor of Flute at Royal Northern College of Music (RNCM)

“Sankyo has a most beautiful, mellow, dynamic and expressive sound, a perfect intonation and balance between the three octaves of the flute; it has a very fast and precise attack, and, on top of this, it is a flute with an elegant and attractive design.”

As a soloist and orchestral player he gives numerous concerts and recitals throughout Europe, Asia, Australia, the Americas and the Pacific, appears on radio and television, and performs regularly at international music and flute festivals.

Many of his interpretations are available on compact disc, encompassing music by Bach, Blavet, Mozart, Telemann, Vivaldi, rediscovered works by Swedish composers from 18th and 19th Centuries, music from the 20th century with Arnold Schoenberg’s Sonata Opus 26, and Chitra by Pierre-Yves Artaud for Basse de Traversière and backtrack. In spring 2016 his recording of the famous Sonatina for flute and piano by Pierre Boulez was released by Naxos. His repertoire includes a great number of works dedicated to him. At the moment he is recording a CD with 20th Century classics for solo flute with works by Debussy, Varèse, Jolivet, Berio, Ferneyhough and Takemitsu.

As a researcher and supervisor he works within artistic research and music education of the professional musician. Some examples of his research are: Scandinavian flute music and flute playing from the 18th and 19th centuries, Schoenberg’s twelve-tone technique, French early 18th century music, Debussy's Syrinx for flute and its connection to theatre, and investigations into new fields of flute acoustics. Further he works within fields dealing with European 18th century transverse flutes and modern flutes in cross cultural combination with non-European instrument such as the Korean kayagum. His doctoral thesis is about the French art of flute playing, its tradition, learning, craftsmanship and aesthetics covering the period from 1707 to the very late 20th Century.

His broad approach to music has made him an authority on 18th and 19th century flutes in theory and practice, including a reconstruction of Hotteterre’s Basse de Traversière. During some years he designed flutes in Beijing (China) for among others the flute factory TAMINO FLUTES.

He received his musical education in Gothenburg (Gérard Schaub), Copenhagen (Ørnulf Gullbransen), Cologne (Amadeus Quartet) and Paris (Alain Marion). Close contact with flautist and Professor Alain Marion in Paris was especially fruitful, as was the chamber music studies with the Amadeus Quartet in Cologne.