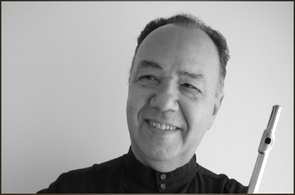 “The Sankyo flute has a wonderful tone color. I will continue playing my 5K during the rest of my life.”

Mr. Woltzenlogel has appeared as soloist and presented masterclasses throughout Brazil, South America, and Europe. He is the founder of the Villa Lobos Woodwind Quintet, Ars Barroca, Sexteto do Rio, Classic Jazz from Rio de Janeiro, Duo Instrumentalis (flute and percussion), and Flautistas do Rio and the Radio Ministerio da Educacao e Cultura Chamber Orchestra. He has served for 14 years as the director of The National Foundation of Arts Band Music Program.

His Illustrated Flute Method with a preface by Jean-Pierre Rampal is published in four languages. He has also published a collection of Brazilian Music for flute ensembles as well as for flute and piano through Irmaos Vitale Editors.