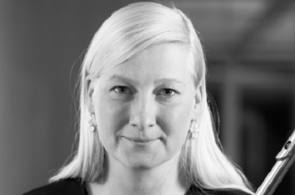 Professor of Flute at Musikhochschule Würzburg

“The Sankyo flutes have the sound for me, and I cannot imagine changing to another flute.”

Christina Fassbender studied at the Musikhochschule Stuttgart with Prof. Jean-Claude Gérard, as well as completing postgraduate studies at the Mozarteum in Salzburg with Prof. Michael Martin Kofler.

From 1996 to 1999, she was a flutist in the Munich Radio Orchestra. From 1999 to October 2012, she was the First Principal Flute in the orchestra of the Komische Oper Berlin.

As a solo flutist she has also worked with orchestras such as the Berlin Philharmonic Orchestra, the Orchestra of the Bavarian State Opera Munich, the Staatskapelle Berlin, the Symphony Orchestra of WDR and with many others.

Christina Fassbender has performed as a soloist and chamber musician in Germany, Japan, Norway, Chile, Costa Rica, the United States and Canada. She has also made numerous radio broadcasts and CD recordings.