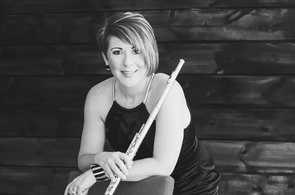 Flute Professor at University of Nebraska at Omaha

Performing on Sankyo Flutes Since 2007

“When I found my Sankyo flute in 2007, it transformed my flute playing in ways I never imagined: I discovered a remarkably rich color palette that offers me seemingly endless options in the tonal spectrum, the mechanism is superb, and the craftsmanship of the flute itself is aesthetically beautiful. When I play my Sankyo, the flute isn’t merely a physical part of me but rather, it becomes an audible extension of my emotions, allowing me to freely share what is in my heart with my audience.”

Described by Flute Focus as “…having shattered any notions that the piccolo might be lacking in deep, expressive powers," Christine Erlander Beard enjoys an active international career as a soloist, chamber artist and teacher, constantly in demand as performer and clinician at flute festivals and college campuses throughout North America, South America and Europe. Applauded for her interesting and diverse recital programming and “warm lyricism” (BFS journal, Pan), Christie strives to showcase expressive music written for the flute and piccolo as well as promoting new and original works with a focus on American composers.

In 2007, Beard founded the International Piccolo Symposium, an intense 4-day workshop held at the University of Nebraska at Omaha. A member of the NFA’s piccolo committee and a contributing editor for the NFA's The Flutist Quarterly, Christie’s pedagogical articles and columns have been published in Flute Talk, The Flutist Quarterly, Flutewise, and The Instrumentalist.

Beard earned her MM and DMA in flute performance from The University of Texas at Austin. She joined the faculty at the University of Nebraska at Omaha in 2002 where she teaches flute, woodwind pedagogy, chamber music and heads UNO's contemporary music program as the director of Ensemble 768.