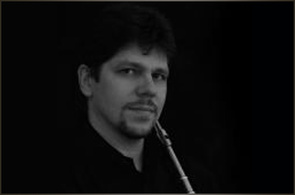 Flute Professor at the Szechenyi University

“These well-tempered flutes, free of any compromise, have a special, well identifiable timbre, a kind of velvet-like quality in the sound, still, they let the player’s individual sound get through easily. Who needs more than that?”

Born in Hungary, Gergely Ittzés is one of the most proactive and versatile flutists of music scene. While being known as a researcher of his instrument and composer of many experimental flute works, he does not specialize in contemporary music only but tries to connect it with tradition. In addition to classical and modern music, several other styles have also influenced his musical idiom, like jazz and free improvisation.

Ittzés has arranged many works for flute, has edited flute publications, and worked with publishers including Akkord, EMB, Universal, Billaudot, Presser and Kossack. In his compositions, he applies the latest up-to-date techniques, especially polyphonic flute playing which he introduces in Flouble, his software and DVD. He published the Hungarian version of his comprehensive flute methodology book Flautology in 2018 and has also recorded more than twenty CDs to date.

After graduating at the Franz Liszt Academy of Music in Budapest, Ittzés was awarded scholarships to study at Prague Mozart Academy and Banff Centre for the Arts. As a flutist he is highly influenced by István Matuz and Aurèle Nicolet. His important chamber music teachers were György Kurtág and Ferenc Rados. He holds a doctorate from the Franz Liszt Academy for his dissertation “ The Role of Polyphonic Thinking in Flute Playing". Among other distinctions Ittzés won the Grand Prix of the 2nd Aleksander Tansman International Competition for Musical Personalities, Franz Liszt Award, and Lajtha Award. In 2017, he was a Fulbright guest professor at Boston University. In 2018, he was awarded a three-year grant from the Hungarian Academy of Arts for his creative work. Before joining the Tianjin Juilliard faculty, he taught flute at the Széchenyi University in Győr and gave master classes worldwide.