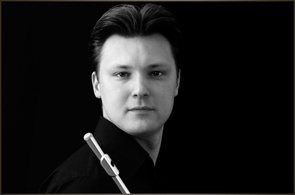 “Sankyo Flutes are brilliant instruments, allowing flutists to reach tone and colors as well as wide dynamic range and flexibility.”

Grigory Modashov was born in 1982 in Samara, Russia. He studied at the Specialized Music School for talented children in Saint-Petersburg, Russia and then at the Rimsky-Krosakov Saint-Petersburg State Conservatory. Modashov continued his studies in Germany with Prof. Renate Greiss-Armin at the Staatliche Hochschule für Musik Karlsruhe and with Prof. Benoit Fromanger at the Hochschule für Musik Hanns Eisler Berlin.

As a soloist and chamber musician, he has played in concerts and festivals in Germany, France, and Russia.

As a substitute Principal Flutist, he has worked in orchestras such as the London Symphony Orchestra, Bamberger Symphoniker, Gürzenich Orchester Cologne, Bavarian State Opera House and worked with conductors such as Gennady Rozhdestvensky, Michael Tilson Thomas and Kent Nagano. In 2008, he was a substitute Principal Flutist in Orchestre Philharmonique du Luxembourg under direction of Emanuelle Krivine.

He has been Co-Principal Flutist in the Deutsche Radio Philharmonie Saarbrücken Kaiserslautern in Germany since 2009 and teaching at the Hochschule für Musik in Saarbrücken since 2013.