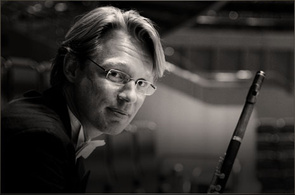 Performing on Sankyo Flutes since 2006

Herman van Kogelenberg regularly appears as a soloist, chamber musician and orchestra player in festivals throughout the world. He is a founder member of the Farkas Quintet Amsterdam since 1997. He has made guest appearances with Chamber Orchestra of Europe, Swedish Radio Symphony Orchestra and Asko-Schönberg Ensemble.