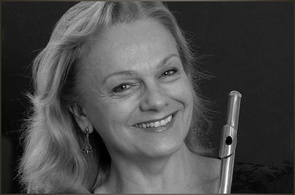 Moderator of the TUTTIFLUTTI! Flute Forum

Performing on Sankyo Flutes Since 2003

In 1975 at the age of 25, Isabelle relocated in California, where she was appointed Lecturer-in-Flute in the Department of Music (now the School of Music & Dance) at San Jose State University.  At San Jose State University, Isabelle taught both undergraduate and graduate flute students for 33 years, until her retirement in 2008 at the rank of Senior Lecturer in Flute with an award for “outstanding teaching” from the President of the University.  In 2014, Isabelle received a letter of commendation from the U.S. Secretary of Education, recognizing her as "one of the United States' most influential teachers."

Isabelle serves as Principal Flute of the Orchestra of Opera San José.  She has performed more than 100 operas in that role since the company was founded in 1983.  Also, from 1975-1985, she served as Principal Flute with the San Francisco Chamber Orchestra.

As a flute soloist, Isabelle has performed flute concertos with numerous orchestras in the U.S. (including the San Francisco Chamber Orchestra, the San Jose Chamber Orchestra, the Stockton Symphony, the Greensboro NC Symphony) and in Europe (including the Orchestre de Chambre of the French Radio, the Philharmonique de Dijon, l’Orchestre Jean-Francois Paillard, l’Orchestre du JMB in Belgium.)

Recently, together with American flute soloist Robert Stallman and the Czech Chamber Orchestra under Andrej Kukal, she recorded a Sinfonia Concertante by Mozart for two flutes and chamber orchestra -- that is, an arrangement by Robert Stallman, orchestrated by British composer Stephen Hodgson, of Mozart's Sonata in D Major for two pianos.  Now a best-selling CD, this recording is released on Bogner’s Café CDs, available on Amazon.

Together with her husband, conductor Mark Starr, Isabelle is co-musical director of the Alliance Francaise Silicon Valley French Music Festival, now in its second season.  In May 2015, Isabelle will serve in the jury of the Concours des Prix at the Conservatoire de Marseille.