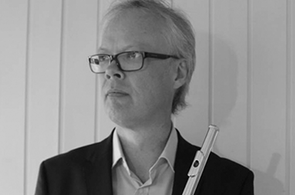 Professor of Flute at University of Agder

“For me, Sankyo key characteristics include purity, colour and response. The sound blends smoothly with other instruments and carries easily. Also, my alto flute has balance and beauty in all registers.”

Norwegian flautist Jørn Eivind Schau was trained at the Royal Academy of Music in London and the Norwegian Music Academy in Oslo. Since the age of eighteen he has served with the major Norwegian symphony orchestras and professional wind bands, and from 1999 he taught part time at the Agder College of Music as well as being affiliated with the Kristiansand Symphony Orchestra. Today he is the only full time University flute professor in Norway, holding a position at the University of Agder, Faculty of Fine Arts.

In recent years his interest in flute ensembles has led to numerous clinics and lectures for universities and flute associations.  As the founder and artistic leader of the Norwegian Flute Ensemble, he has worked closely with composers to expand the flute ensemble repertoire. The discography includes work-dedications by Norwegian composers Trygve Madsen, Hans Magne Græsvold, Konrad Øhrn and Terje Mathisen, and baroque concertos by Bach, Händel and Vivaldi.