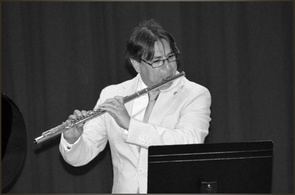 Performing on Sankyo Flutes Since 1985

"What I like about the Sankyo flutes is its presence and projection, and especially its perfect adaptation to changes of color."

Joaquin Gericó was born in Alcàsser (Valencia) in 1962. He studied at the Conservatory of Music in Valencia under the direction of Jesús Campos. In Madrid he studied with Andres Carreres and later in France with Raymond Guiot and Alain Marion, and in England with Geoffrey Gilbert and Trevor Wye.

His "13 Estudios sin opus para flauta sola" are a strong contribution to the pedagogy of this instrument. He also has several works for band and orchestra and he is the conductor of flute orchestras at the Valencia Superieur Conservatoire. Likewise, he teaches improvement courses and lectures frequently and he continues working as concert player.

He also has published several books on the history of the flute in Spain, as well as others on the musical traditions of his native village, the history of the Band of Alcàsser, and the life and work of the Valencian composer Leopoldo Magenti. He holds a PhD from the University of Valencia, Academic Researcher MI Academy of Music Valenciana, and is a member of the Board of Governors and a member of the SGAE.

Joaquin Gericó was the founding President of the Spanish Association of Flutes in 1989.