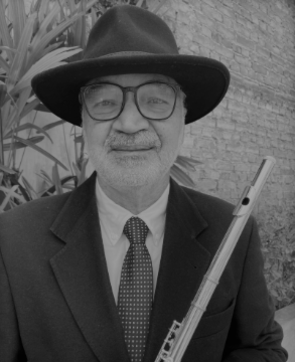 Performing on Sankyo Flutes Since 2022

“The sound of my CF 901 Sankyo flute is very special. It offers many color possibilities, the intonation is terrific, and the range of dynamics is very impressive. My Sankyo flute gives me complete freedom to play in the orchestra, chamber, and as a soloist. The quality of the workmanship is outstanding, and the precision of the mechanism is stunning. I couldn’t be happier with my new Sankyo flute!”

José Ananias Souza Lopes, one of the most prominent Brazilian flutists, was born in Amapá (Brazil) in 1958. He initiated his musical studies in São Paulo, graduating in 1979 from the São Paulo Municipal Music School under the guidance of Jean Noel Saghaard. In Paris, he studied with Christian Lardé and Pierre-Yves Artaud, as well as attending master classes with Keith Underwood (USA), Wolfgang Schulz (Austria) and Jean-Claude Gerard (France). As a member of the Youth Symphony Orchestra in São Paulo, he was admitted to the Municipal Theatre Orchestra (São Paulo Opera’s House) in 1985. Since 1986, he is a flutist at the São Paulo Symphony Orchestra. The São Paulo Symphony Orchestra (OSESP) is today the most important orchestra in Latin America. José Ananias has performed during several of its international tours in: South America (2000, 2005 and 2007); United States (2002, 2006 and 2009) and Europe (2004, March 2007 and October 2008), when the orchestra played 30 concerts at the most important symphony halls in France, Poland, Austria, Hungary, Germany, Portugal, Switzerland and Spain. The orchestra records exclusively for the Swedish Label “BIS” and José Ananias has played in several albums, some of which internationally awarded, including the Latin Grammy. During his career with OSESP, Jose Ananias has worked with famous conductors such as: Kurt Masur; Stanilasw Skrovachwiesk; Paavo Berglund; James Sedares; Eleazar de Carvalho; Eiji Oue, Gerard Schwarz; Theodor Guschulbauer; Alain Lombard; Peter Maxwel Davis; Lawrence Foster; Frank Shipway; Helmut Rilling; Heinz Holliger, Thierry Fischer, Robert Trevinno, Louis Langrée and many others. José Ananias has presented numerous recitals in Brazil and abroad and has been a soloist at the majors Brazilian Symphony orchestras, such as São Paulo University Symphony Orchestra; Camerata Fukuda; São Caetano Philharmonic and others. In 1990, during the São Paulo Symphony Orchestra’s special season to celebrate the W.A. Mozart’s bicentennial death, he was the soloist for the Mozart’s flute and harp concerto. José Ananias played for the first time in the United States of America during the 28th National Flute Convention (Columbus, Ohio) in August 2000, when he presented two recitals. As a champion of contemporary Brazilian classical music, Jose Ananias participates regularly in the New Music Festival of São Paulo. He premiered several works in Brazil, including “Night Flowers” for flute, guitar and tape, by Jonh Winiarz; the Brazilian premiere of “Folk Pieces” by Luciano Berio, “Toward the Sea” by Toru Takemitsu and the Lucas Foss’ “Renaissance Concerto” for flute and orchestra. As a chamber musician, José Ananias was one of the founders of the Wind Quintet of Gramado, a group with which he has performed around Brazil and abroad, including an European tour in 1988. Since 2011, he is a member of the Camargo Guarnieri Woodwind Quintet.

At the Tatuí Music Conservatory, José Ananias taught from 1983 to 1987. Since 1990, he teaches at the São Paulo Municipal Music School, the most competitive and renowned music school in Brazil. From 2003 onwards, he also took over the position of flute professor at Centro Musical Tom Jobim. As Chamber Music professor, Jose Ananias has been teaching at the São Paulo Symphony Orchestra’s Music Academy since the beginning of 2007. As a teacher and performer, José Ananias has participated in the major musical festivals of Brazil, such as Curitiba (from 1990 until 1996 and 2007), Belém (1988, 1989), Tatuí (1985, 1986) and Brasília (1983 1984, 1985, 2000 and 2015). In 1999 and 2000, La Scala de San Telmo Foundation (Buenos Aires, Argentina) invited him to deliver one-week intensive master classes and two recitals In June 2004, José Ananias was guest flute teacher at the III Encuentro de Flauta Del Sur Del Mundo (Osorno, Chile), presented by Fundacion Orchestra Juveniles y Infantiles de Chile. During March and April 2005, José Ananias was once again invited to present a recital and master classes at the Instituto Profesional Escuela Moderna de Musica (Santiago, Chile) and at the Professor J. Aguirre Conservatory of Music at Lomas de Zamora (Buenos Aires, Argentina). In September 2006, he delivered masters classes at Escuela de Musica de la Facultad de Humanidades y Artes (Rosario, Argentina) and at the Conservatorio Beethoven (Buenos Aires, Argentina).

Master Classes in the United States

In the year of 1995, José Ananias began his partnership with the Label Paulus (www.paulus.com.br). On his first CD, totally dedicated to the flute music of Joseph Bodin de Boismortieu, José Ananias played and directed the São Paulo Flute Quintet. His second album, entitled “Charles Koechlin et la Flûte”, was released in 1996 and was entirely dedicated to the French composer Charles Koechlin. This CD included some world premiere recordings and was released in United States in 1997, receiving raves reviews. The third album is a collection of Brazilian Music for flute and guitar, entitled “Brazilian Celebration”. The repertoire of this CD offers a broad and highly representative sample of Brazilian music for flute and guitar, two instruments intrinsically associated with the evolution of the main stylistically features and music genres of Brazilian music. José Ananias released his fourth album in 2000, entitled Flute Fantasies, in which he joined by the famous French flute player, Benoit Fromanger, first flute of the Bavarian Radio Orchestra, and the Villa-Lobos Chamber Orchestra. They recorded collections of flute operatic fantasies for one or two flutes and orchestra. His fifth album is entirely devoted to the music of Brazilian composers, such as Camargo Guarnieri and Francisco Mignone, the most famous Brazilian composers after Villa-Lobos. On this recording Jose Ananias put together for the first time all the chamber flute repertoire by Guarnieri and made also several first world recordings of Francisco Mignone’s flute music. This CD was released in October 2007.