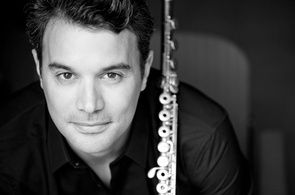 Performing on Sankyo Flutes Since 1996

“Sankyo and I are a love story that started 18 years ago. The incredible depth, elegance, and power of sound from my flute is a gift. Every single time I play it, I feel very lucky to play such a great instrument and to belong to this fantastic flute family. Every detail counts and every detail makes the difference. That's why I play Sankyo.”

Renowned flautist Julien Beaudiment brilliantly represents the French flute school. Born in 1978, he crossed the Channel when he was 18 years old to study at the Guildhall School of Music in London with Paul Edmund-Davies and Averill Williams. He stayed there two years, before finishing his studies at the Conservatoire National Superieur de Musique de Paris with Sophie Cherrier, assisted by Vincent Lucas and Michel Moragués for Chamber Music.

From 2005 to 2006 he was appointed principal flute of the BBC National Orchestra of Wales under Thierry Fischer and he temporarily took leave from his orchestra in Lyon, which he rejoined the following year. He is currently the only French flautist to have held this position in a great British Orchestra.

A chamber music enthusiast, he is a Laureate of the Barcelona International Sonata Competition. He is also a member of the Faust Wind Quintet, made up of talented representatives of the new generation of French woodwind players (Nicolas Baldeyrou, Nora Cismondi, Julien Hardy and Benoit de Barsony) and accompanied by the famous dancers/choreographers Regine Chopinot and Benjamin Millepied, This group has performed Bach's Partita the world over. He is regularly invited to play with the world renowned Academy of Saint Martin in the Fields in London.

His particularly rich musical career has nevertheless left him time to teach. He teaches flute at the Conservatoire National Supérieur de Musique de Lyon as well as teaching many master classes in the USA, Europe and Asia.