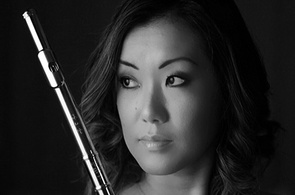 Performing on Sankyo Flutes Since 2015

"My Sankyo flute made me fall in love with the flute all over again. I feel more connected than ever to the music and to myself, and it pushes me to always be musically curious and explore new possibilities. I am certain that this is the flute that will continue to inspire me and I cannot be more excited to grow together for years to come!"

Born in Tokyo and currently residing in New York, Kaori Fujii has emerged as one of the leading imaginative and creative flutists ever to come out of the classical music world. From baroque to contemporary, it’s Kaori's distinctive sound and intensity of feeling that captivates concert audiences and CD-listeners alike.

A graduate of the Tokyo University of the Arts, and of the soloist class of the University of Music and Performing Arts Stuttgart, Kaori has studied extensively with Jean-Claude Gerard, Paul Meisen, Jeannie Baxtresser, Aurele Nicolet, Wolfgang Schulz, Sir James Galway and Akiko Mikami.

In 2014, Kaori has founded Music Beyond, Inc. – a nonprofit organization that trains musicians to become music teachers in developing countries. Currently, she frequently visits the Democratic Republic of the Congo in Central Africa to teach existing classical musicians.