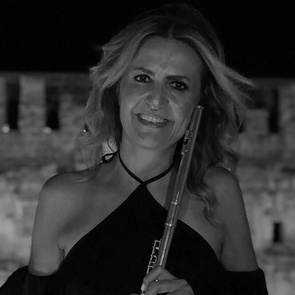 Lelya Bayramoğullari started her education at the D.E.U Izmir State Conservatory in 1986, studying with Professor Cahit Koparal. After graduating with honors in 1994, she continued her studies with Associate Professor Yo Washio, graduating with a master’s degree from the Academy in 1999 in addition to studying with Professor Andre Sebald at "Folkwang Music Academy". Leyla completed her PhD in the Proficiency in Art Program in 2014 through her studies with Associate Professor Ayla Uludere at Mimar Sinan Musical Art University. During this time, Leyla taught flute lessons as well as performed solo/chamber music & orchestra concerts. She shared first place in the "Köhler Ostbahr" Chamber Music competition in 1996. In addition, Leyla has performed solo and chamber pieces in masterclasses with well-known flute players, such as; Prof. A. Nicolet, Prof. J. P. Rampal, Prof. R. Wendorf, Prof. M. Epstein, Prof. M. Martin Koffler, Prof. A. Adorjan, and Prof. L. Oşavkova.

Leyla began performing with the Antalya State Symphony Orchestra in 1999, and performed the J.S. Bach Suite in b-minor as a soloist that same year. She developed the flute class of Akdeniz University State Conservatory in 2000 and continued lecturing until 2007. She is currently performing in Antalya State Symphony Orchestra where she was also the Chief Assistant of the Flute Division from 2008 to 2010.

Leyla has enjoyed additional projects, such as adjudicating the 16th International Flute Competition in Nice (France) in 2018, and having her article "Flute Stage in Turkey" published in "Flöte Aktuel" (Germany).