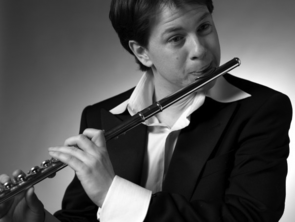 Applauded by the press, Loïc Schneider has also received the plebiscite of his most distinguished elders in international competitions of high prestige. Laureate of the Rampal Competition (2005) and of the Kobe Competition (2009), he has also won three first prizes in 2006 at the Nicolet Competition of Beijing, in 2007 at the Larrieu Competition of Nice and finally at the renowned ARD Competition of Munich in 2010 where he has been additionally acclaimed by the public, which awarded him an Audience Prize for the ease of his technique and the quality of his interpretation.

This success has naturally opened the gates to many festivals like the Rheingau Musik Festival, Nürnberger Gluck Festival and Summerwind Festival in Germany, Festivals of Périgord Noir, of Menton and Les Estivales du Médoc in France, the Central European Music Festival of Slovakia and the Musical Olympus Festival of Saint-Petersburg. He has been invited to perform as a soloist with famous orchestras such as the Beijing Symphony Orchestra, Taipei Evergreen Orchestra, Slovakia’s Radio Orchestra, Nümberger Symphoniker, National Orchestra of Lorraine, Philharmonic Orchestra of Strasbourg, Stage Ermitage Orchestra, Wïrttembergisches Kammerorchester Heibronn, Osnabrücker Sinfonieorchester, Oldenburgisches Staatsorchester and the NDR Sinfonie-Orchester Hamburg.

Born in 1981 in Strasbourg, Loïc Schneider studied flute at the music school (CNR) of his native town with Christine Turellier, Philippe Jolivet and Sandrine François. He later continued studies with Claude Lefèbre at the Conservatory of Paris (CNR) before beginning, as the very first one nominated, at the Conservatoire National Supérieur de Musique de Paris in the class of Sophie Cherrier. Before his studies were complete, he won a first prize and obtained the position of 1st Solo Flutist at the National Orchestra of Lorraine at Metz. He occupied this post from 2004 to 2009. He was then nominated 1st Solo Flutist of the Swiss Romande Orchestra at Geneva by Maestro Marek Janowski. Loïc Schneider was honored in 2010 by the Music Award of Osnabrück in Germany. The Suiss Global Artistic Foundation has supported his talent since 2011.