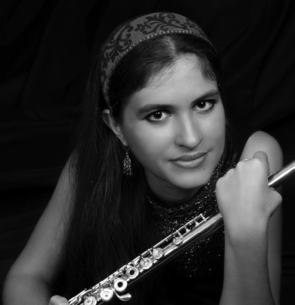 Marta Femenia has performed with great success in various concert halls and in Madrid’s famous musical cycles like Caja Madrid and “Summer Classics” as well as several recitals with the pianists Niguiar Askerova, Álvaro Guijarro and Gerardo López Laguna. In 2013, she performed a recital at the Palazzo Grimani-Marcello of Venice with the pianist Caroline Haffner.

Ms. Femenia graduated from the Royal Conservatory of Music in Madrid with the Honor Award Thesis, having studied with Professor Manuel Rodriguez. While there, she performed the C. Reinecke Flute Concerto with the RCSMM orchestra. She has also studied with with Pilar Constancio, James Lyman, Soyoung Lee, Mario Caroli and Vicens Prats. Additionally, she attended the Anento Flute Courses with Fernando Gómez Aguado and Antonio Nuez. In those courses, she participated in masterclasses with José Sotorres, Miguel Ángel Angulo, Salvador Martínez and Antonio Arias. During 2010 – 2011, she was Claude Lefebvre’s pupil at the International Summer Academy of Nice, and continued her studies with him in Paris. Marta recently passed the entrance examinations of the Academy of the National Orchestra of Spain, and is currently perfecting her studies at the Reina Sofia Music School with Jacques Zoon.