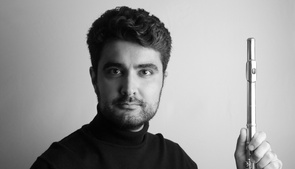 “As a contemporary music specialist, I played an extremely taxing amount of repertoire on my Sankyo for a decade and never encountered any issues with the mechanism. The instrument was always there to provide a voluminous tone, a versatile color palette, and a trustworthy touch.”

Iranian flutist, Mehrdad Gholami, received the presidential award and Iran’s National Elites Foundation scholarship to continue his training at the University of Tehran, where he studied with Dr. Azin Movahed.

During his time in Tehran, Mehrdad won numerous solo and chamber music competitions in Iran such as Fadjr International Music Festival, Iran Young Artists Competition, and Tehran Flute Competition. In the U.S., He has won concerto competitions as well as being a finalist in the Texas Flute Society’s Myrna Brown Young Artist Competition.

As an orchestral player, he started with Tehran’s ensembles such as Tehran Contemporary Ensemble, Tehran City Hall Orchestra, and Tehran Symphony. Later, he came back to work with TSO as their principal flute player under the direction of Maestro Alexander Rahbari for the 2015’s summer season. Other orchestral appearances include Kaleidoscope Chamber Orchestra (Los Angeles, Disney Hall debut), Fort Worth Symphony, and McKinney Philharmonic.

At an early age, Mehrdad started working with composers and devoted his time to commission, premiere and record new sounds for flute with various ensembles. These collaborations with Iranian composers led to the creation of more than hundreds of new pieces for flute with different ensembles and media. His first solo album was published by his alma mater, University of Tehran, in a joint project with Iran Flute Society. He has appeared in recordings in various genres ranging from contemporary classical music to world music and pop music. Mehrdad’s efforts in presenting, performing and publishing new Iranian music has led to a growth of compositions for flute by Iranian composers and similar projects inspired by his “Iran Flute Project”. His most recent CD was published by Mahoor Publication inside Iran and it is available on all online platforms.

A sought-after pedagogue, Mehrdad has served as an adjudicator on panels for National Flute Association, Texas Flute Society and Texas Music Educators Associations. He has offered masterclasses and workshops on various topics from beginner pedagogy to contemporary techniques across the United States. On high demand as a teacher, Mehrdad’s students have won national awards in addition to students having qualified for the exclusive TMEA all-state band every year.

Mehrdad’s Doctoral dissertation was on the subject of “Iranian contemporary music for flute” where he included an expansive chapter on the history of Western music in Iran. As an advocate of his “Iran Flute Project”, Mehrdad has premiered works by Iranian composers at the National Flute Association and Mid-Atlantic Conventions. He received his MM and DMA in flute performance under the guidance of Dr. Shauna Thompson at Texas Christian University. Currently, Mehrdad is based in DFW Metroplex, where he is serving as Adjunct Professor of Flute at Texas A&M - Commerce University and runs his private studio in addition to freelancing with local ensembles and orchestras.