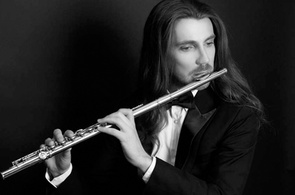 “I love Sankyo flutes! They have a rich deep tonal palette and a mechanism that is second to none.”

Irish flutist Niall O’Riordan enjoys an international career as soloist and teacher. In 2014 he was awarded the rising star award by Sir James Galway at the Galway International Flute Festival, Weggis, Switzerland.

As a soloist Niall has appeared at the First Canadian Flute Convention (2013), the British Flute Society Convention and the San Francisco International Flute festival (2014) and performs regularly in Europe and with duo partner Anne Marshall. He is a co-founder of Whole Musician, a collective of five international flutists offering unparalleled holistic retreats.

Niall is an experienced and passionate teacher and holds advanced qualifications in flute pedagogy from Lund University, Sweden, where he was later visiting lecturer. He has also taught at University College, Cork, and the Cork School of Music, assisted at the Oxford Flute Summer School (2006-2010), and gave workshops at William Bennett’s Summer School (2011).

Niall is a certified Feldenkrais Method awareness through movement teacher and uses the method to help musicians reach their potentially by learning about their functioning and how to act efficiently. He has taught Feldenkrais classes at the Galway International Flute Festival since 2013. He is internationally recognized for his completely holistic approach to flute playing and teaching drawing inspiration from yoga, psychology, voice work, Neuro-Linguistic Programming (NLP), metaphysics and visualization. He has given workshops at the last four British Flute society Conventions on his pioneering style.

Niall O’Riordan was awarded his MA and BMus from Cork School of Music, Ireland, where he studied with Evelyn Grant and Sabine Ducrot. Since 2011, Niall has been mentored by Sir James Galway in Switzerland. He writes regularly for PAN magazine, the Journal of the British Flute Society.

The photo shown is by Jam Deluxe.