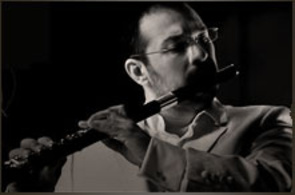 Performing on Sankyo Flutes Since 1998

“The reliability of Sankyo flutes’ mechanism is unsurpassable.”

One of the most versatile flutists of Greece, Nikos Nikopoulos has been praised by the press for his velvet and rich sound as well as his faultless virtuosity. Since 2000 he has been principal flute with the Greek National Opera orchestra. As first flute he has also played with the TSSO, the Camerata – Armonia Atenea and the City of Thessaloniki Symphony Orchestra. As soloist he has collaborated with most major orchestras of his country, the Wiener Kammerorchester, the Virtuosi di
Praga, the University of Leeds Chamber Orchestra, the GNO Chamber Orchestra.

Deeply devoted in chamber music, he has participated in innumerous concerts with various instrumental combinations and he was co-founder of the Hellenic Woodwind Academy. He also performs as Duo Choriambus – with harpist Georgia Xagara.

Nikos is a graduate of the State Conservatoire of Thessaloniki and the Conservatory of Athens and he holds a Postgraduate Diploma from the Royal Northern College of Music, a Masters degree (MMus with distinction) from the University of Leeds and a Specialized Master (Soloist) from the Zurich University of Arts. Among his most influencial teachers are M. Ziegler, P. Lloyd, R. Davis, I. Macovei, R. Brown (traverso) and P. Morris (piccolo).

As a founding member of FluteArt he was actively and repeatedly involved in the organization of the Flute Meetings, the annual flute festival of Greece.

A strong advocate of the historically informed performance he has participated in recordings and concerts both as soloist and orchestral player with Armonia Atenea on period instruments.

As a member of the ERGON ensemble he also devotes himself to contemporary music.