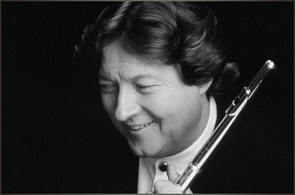 “It is a joy to play Sankyo flutes—for well over thirty years now. My Sankyo is marvelously responsive, with a large, but subtle, tonal palette, allowing me ease, control and full musical expression. Sankyo is in a class by itself-- the Stradivarius of flutes.”

The unusual creativity of Robert Stallman's long and distinguished career as solo flutist, chamber musician, recording artist and master teacher has won the highest respect from the international press.
Robert Stallman graduated from the New England Conservatory with two degrees and the school’s top prize, the Chadwick Medal. Mentored by Jean-Pierre Rampal early on, he went to Paris as a Fulbright scholar to study with Rampal, Alain Marion and Gaston Crunelle at the Paris Conservatoire.

In 1977, Stallman founded the Cambridge Chamber Players and the Marblehead Summer Music Festival in Massachusetts, where for twenty years he created a unique series of chamber music concerts. Stallman was a special guest in Vienna’s celebration of the Mozart 250th, joined by the Martinu Quartet in the Schubertsaal, performing his Mozart arrangements to warm acclaim.

Stallman's credits as a recording artist include his widely praised releases for ASV, VAI, Sony, MHS, Biddulph, and other labels. In 2006, Stallman and his wife, Hannah Woods, founded the Bogner's Café label, bringing Stallman's esteemed arrangements of works by classical composers to new audiences.

Robert Stallman has long made it his mission to expand the flute repertoire with apt transcriptions, gratifying flutists everywhere. With over 70 publications from prominent houses in the US and the EU, he has emerged as the preeminent editor and arranger of flute music active today.

Devoted to developing the next generations of musical talent, Stallman has conducted numerous master classes at schools and venues across the U.S. and throughout the world.