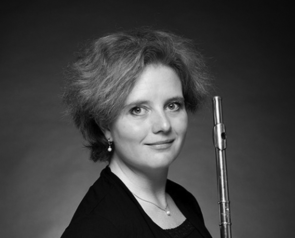 Sarah Rumer studied in Zurich at the side of Félix Derigo and Günter Rumpel, and afterwards in Vienna with Dieter Fluty. Since then she has had commitments with the Orchestrakademia of the Zurich Opera in Graz and Salzburg. From 2004, she has also been the Solo Flautist at the Orchestra de la Suisse Romande in Geneva.

At the same time, among other things, she performs with the Symphony Orchestras of the Berlin and Frankfurt Radios, the Vienna Philharmonic and the Tonhalle of Zurich.

Sarah Rumer has won Swiss competitions and grants, and received prizes in various international competitions such as Odense (Carl Neilson) in Marknekirchen, Germany and Kobe (Japan) where she received a special prize for Mozart interpretations.

Notably, as a soloist she has played with the Tokyo Ensemble, the Schweizer Kammerorchester and the Orchestre de la Suisse Romande. As a chamber player she has performed with many groups ranging from duo to dixtuor. Sarah Rumer has been teaching at The Lucerne High School since 2011.