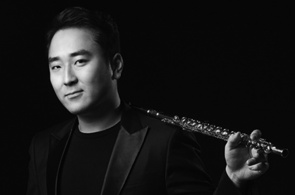 Praised for his exceptional musicianship and depth of expression, Seoulborn flutist SUNGHYUN CHO has steadily solidified his international reputation as a soloist, ensemble player and member of prominent orchestras. In 2017, he was newly appointed as the principal flutist of Cologne’s Gürzenich Orchestra under the direction of François-Xavier Roth. Before assuming this coveted position recently, Cho had served as the principal flutist of Konzerthausorchester Berlin for its 2015/16 season and also as a member of the prestigious Karajan Academy of the Berlin Philharmnic, working with such prominent conductors as Simon Rattle, Iván Fischer, Zubin Mehta, Andris Nelsons, Semyon Bychkov, Tugan Sokhiev, Daniele Gatti, Riccardo Chailly, Alan Gilbert, Reinhard Goebel and Jörg Widmann.

A renowned ensemble player, Cho is a member of Veits Quintet, a group he formed with his colleagues Kyeong Ham (oboe), Han Kim (clarinet), Rie Koyama (bassoon) and Ricardo Silva (horn). The quintet won Second Prize at the Carl Nielsen International Chamber Music Competition and has performed actively in Europe in festivals such as the Darmstadt Theater Chamber Series, Fischerhuder Hofkonzerte Series, Musikalischer Sommer in Ostfriesland among others. In 2016, Veits Quintet not only made a successful Japan/Korean debut in Seoul and Tongyeong through Ditto Festival but also released its debut album worldwide with the German label ARS.

Born in 1990, Cho studied at the preparatory division of the Korea National University of Arts with Eui Kyung Park before enrolling at Oberlin Conservatory at age 15 and studying with Prof. Michel Debost. Cho moved to Germany in 2009 and received the Diplom degree at Hochschule für Musik Hannover and then the Master’s degree and the Meisterklasse degree at Hochschule für Musik München under the guidance of Prof. Andrea Lieberknecht. He has also been mentored by Emmanuel Pahud, Andreas Blau and Michael Hasel at the Berlin Philharmonic.