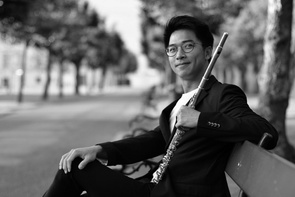 His passion for chamber music and contemporary music has led him and ‘‘Prisma Trio Vienna’’ to the Gläsernersaal in Musikverein Vienna and ECMA music
festival.

Ting-Wei Chen is deeeply passionate about sharing his experience and communicating with young artists in various outreach programs, Workshops or
personal couching. Since 2020 he lectures also flute for the concert study (Konzertfach) at the University of Music and Performing Arts Vienna.