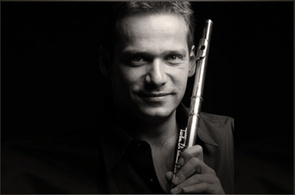 University of Music in Vienna

“My Sankyo 24K flute allows me to play plenty of colors and dynamics at will. Everything is possible with this flute, from an incredibly sweet sound to rough accents, whatever I want. I am so happy to have ‘met’ my Sankyo 24K. There is no doubt that it has become a part of me.”

Both as a soloist and chamber musician, he was awarded prizes in the national and international competitions of Leoben, Cremona, Bonn and Munich (ARD). Since then, he has been on the international concert scene both as a soloist and as chamber music partner. As a soloist, Walter Auer has most recently performed with the Kyoto Symphony Orchestra, the Dohnányi Orchestra in Budapest, the Nuremberg Philharmonic, the Sinfonia Varsovia, the Capella Istropolitana, the Orchestra Academy in Ossiach and the Wiener Virtuosen. As a soloist with the Vienna Philharmonic, Walter was heard performing under the direction of Daniel Barenboim.

Walter Auer is very much in demand as a flute teacher and has recently held master classes in the USA, Australia, Japan and Europe. Since 2012 he has been teaching at the University of Music in Vienna and since 2013 he has been a guest-professor at the Shobi University in Tokyo. His latest recordings were published by the labels Tudor and Paladino in Europe, as well as by Camerata, Nami Records and Meister Music in Japan.

His efforts to extend the flute repertoire have been met with resounding success, including the transcription for flute of Chopin‘s Piano Trio (released by Camerata, 2010), and in the very first recording of works by Italian flautist and composer Giulio Briccialdi (Brilliant Flute – published by NAMI, Japan, 2011). He has also collaborated closely with the composer Luna Alcalay, the Grande Dame of Austrian Composers. In 2011 he performed premieres of works specifically dedicated to himself in Cardiff / Wales (En Passant for flute solo) and at the Musikverein Vienna (Escapade for wind quintet).

Walter Auer studied with Johannes v. Kalckreuth in Klagenfurt and with Michael Kofler in Salzburg. He was also a member of the Herbert von Karajan–Academy of the Berlin Philharmonic for two years. Aurèle Nicolet’s master classes in Basel influenced him strongly.

Walter has three children with his wife Julia, a musicologist and traverso player. Together they head Auers’ Flutery Lectures and Concerts in collaboration with Road Scholar/USA.