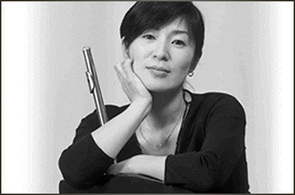 Performing on Sankyo Flutes Since 1993

Yoshiko Nakagawa began studying piano at the age of 4 and flute at the age of 15. After graduating from the Tokyo National University of Fine Arts & Music, she played with the Tokyo Geidai Orchestra at the Tokyo Metropolitan Theatre. She continued her studies at Rueil Malmaison Conservatoire.

Awards include 1st prize in the 1992 Japan Woodwind Competition, the Ataka Award in 1993, and 3rd prize at the 11th Japan Wind and Percussion competition.

She has performed with Kansai Philharmonic, Tokyo Geidai Orchestra, and Kobe City Chamber Orchestra as soloist.

Ms. Nakagawa is co-principal flutist of the Kyoto Symphony Orchestra.