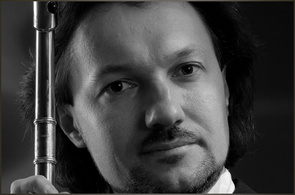 Soloist with National Philharmonic of Ukraine

Professor of Flute at the Institute of Arts of the M.P. Dragomanov National Pedagogical University

Performing on Sankyo Flutes Since 1999

“My Sankyo flute answers perfectly to the passion I feel when performing. It is a real continuation of my individuality, a flute that has been made with love.”

Yuriy Shutko was born on 15 July 1968 in Poprad, Slovakia to the family of musicians. He received musical education at the S. Krushelnytska Lviv Secondary Specialized School of Music, which he graduated from in 1986 with the specialty in flute taught by pedagogue I. Levkovych. The same year, Yuriy entered the Lithuanian State Conservatory in Vilnius and went to the class taught by Professor Algirdas Vizgirda. Since 1989 he studied at Kyiv State Conservatory in classes taught by Professors Oleh Kudryashov and Volodymyr Antonov. In 1993, he was accepted to the assistantship at the P.I. Tchaikovsky National Academy of Music of Ukraine (artistic supervisor Professor Volodymyr Antonov) which he graduated from in 1996.

As a soloist, Yuriy works with all leading orchestras in Ukraine. Beginning from 1993 Yuriy Shutko is a soloist of the National Philharmonic of Ukraine.

Since 1995, he combines his intensive concert activity with the teaching, first at Kyiv National University of Culture and Arts, then at R.M. Glier Kyiv State Higher Music College and Kyiv Children’s Academy of Arts. Since 2005, he is an associate professor at the Institute of Arts of the M.P. Dragomanov National Pedagogical University. Since 2010, Yuriy Shutko is a Doctor of Philosophy.

Yuriy Shutko has recorded three solo albums: The Golden Flute of Ukraine, The Prayer to Orpheus, and Souvenir for Mary, which were praised by specialists and the press. Yuriy Shutko is constant guest of art programs on the Ukrainian radio and TV. He is also the author of critical and polemical essays in the Ukrainian press (Day, Literary Ukraine, Word of Enlightenment, and Ukrainian Leader newspapers and Ukrainian Culture magazine).